According to Transfero, bitcoin is in a period of accumulation

The leading currency remains in a downtrend, behaving stably; according to Transfero’s technical analysis, this may indicate a period of accumulation

Since last week, bitcoin has been in a downtrend, which was driven by the correction. But, it is worth noting that although the moving averages of 50 (MMS 50) and 200 (MMS 200) have crossed, there has not been a sharp drop in the short term. “Thus, we can observe that the asset may be going through a period of accumulation, in which most large investors withdraw their BTCs from exchanges to safe wallets (cold wallets)”,  assessed the Transfero team.

According to analysts, in this kind of scenario, there is usually a loss of volatility (such as the week between January 7 and 14), and the Asset begins to behave in a more “stable” or laterally. Corroborating this moment, it is possible to see the formation of decreasing volumes and the loss of intensity of the correction.

In addition, a prevalent figure in technical analysis has formed, which is the descending triangle. It is explained by a Bearish Line (sloping line) and a Support Line (flat line). “The breach of the Support Line, in this case, would result in a great selling force, and could take the price to the next support, which would be the US$ 37.5 thousand”, Transfero evaluated. However, a breach of the Bearish Line, with volume, could result in a trend reversal in the short term, which, in the opinion of experts, would take the price to the US$47,000 range.

Another interesting detail is that in the last 24 hours (considering the date when this text was written, January 20th), the interest in buying Calls (Call Options) on the closest maturities increased, as shown in the chart below. 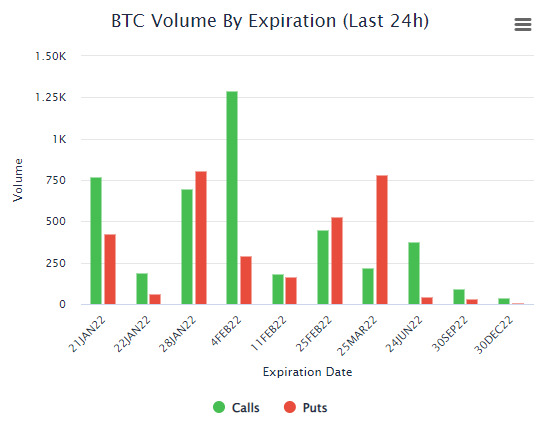 In Transfero’s view, Call purchases in the bearmarket usually indicate that investors assume these options have a low premium value. Thus, the prevailing thought is that they can profit from a slight rise in the market and, consequently, appreciation of the option.