These are the annual lows of bitcoin year to year

Analysis of the bitcoin price by the yearly lows in reais shows the growth trend of the cryptocurrency, and investors who do not want to get rid of it

Once again, bitcoin’s annual lows recorded growth in reais in 2021. According to data compiled by PanoramaCrypto, bitcoin’s 2021 minimum value was R$145.000, recorded on June 22. It is worth noting that the value surpassed this level in the following months, and the currency reached its record in November. Even so, the minimum value exceeded by 488.35% the minimum of 2020, which was R$ 24.645. In 2019, the minimum had been R$ 12.507. This shows that the indicator is on a solid rise in the last two years.

It is worth explaining that bitcoin’s annual lows are the lowest price reached by the leading cryptocurrency each year. This indicator is considered vital as it strongly represents annual resistance. That is, a level that is hardly broken, even in moments of market crisis.

A historical view of the annual lows also reveals the vast price gains of bitcoin since the beginning of its history and a possible increase in the number of holders. In other words, people who don’t get rid of the cryptocurrency, waiting for it to be mainstream one day or have a strong appreciation.

Bitcoin annual lows in reais in other years

See the historical lows of bitcoin in reais, according to data from CoinGeko. 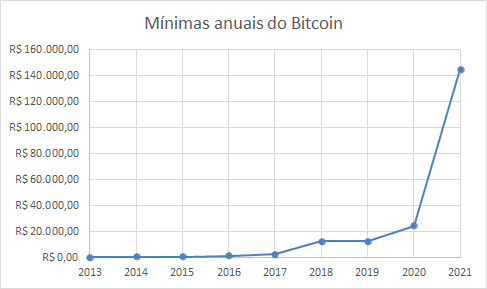