Cardano: get to know about the proposal of the science cryptocurrency

Cardano’s vision is that in the future all cryptocurrencies will work together; the concept of the currency is one of multiple governance

The Cardano cryptocurrency (ADA) is betting on scientific communities in search of solutions to the main limitations of the cryptocurrencies currently on the market. Currently ranked sixth among the highest marketcap cryptocurrencies, Cardano was being traded at US$ 1.21 at the time of this article writing. Its market value is around US$ 39 billion and the daily trading volume reaches US$ 1.6 billion. It currently represents 2% of the market, with a circulating supply of 31.9 billion units.

“With a project focused on the long term and high regard for the power of science and engineering, Cardano has remained since 2017 as one of the largest projects in the market”, said Transfero analyst Lucas Xisto. Today, it is among the top ten cryptocurrencies on the market.

The analyst also highlights the evolution of the project throughout the year and its decentralization. “The dynamics of soft forks and hard forks, strongly promoted by the project creators when necessary, bring in the long run a multiple governance. It recalls the decentralization of the Bitcoin, although we have, in the case of cardano, the consensus for proof-of-stake”, Xisto points out. This mechanism consumes less energy than the proof-of-work algorithm, which is used by Bitcoin. 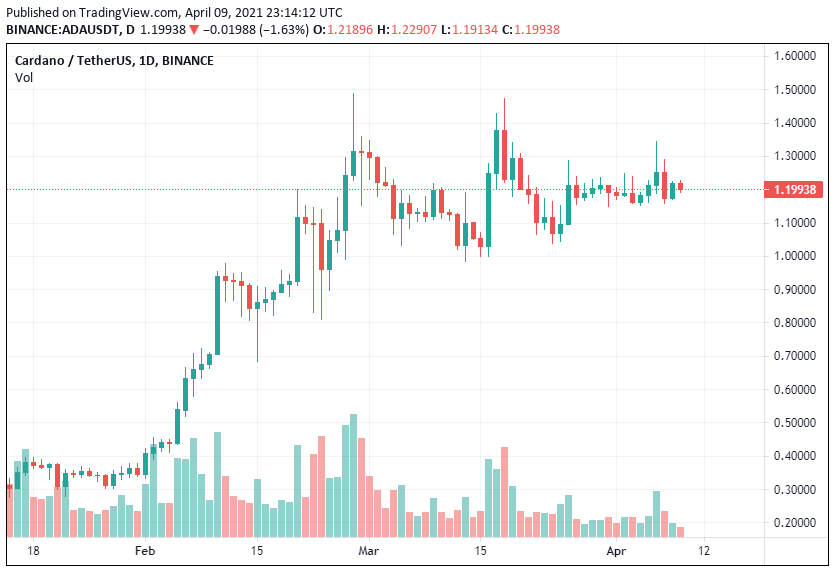 Cardano is a proof-of-stake blockchain that calls itself open and inclusive. On its page, it summarizes that its technology vision aims to “challenge the old and activate a new era of sustainable, globally distributed innovation”.

Founded in 2017, the company, which created the ADA token, claims to be the first blockchain platform built through peer-reviewed research. This allows it to be secure to protect data, scalable to accommodate global systems, and robust enough to support fundamental changes.

Cardano technology is the third generation of cryptocurrencies, the first being the bitcoin and the second ethereum. One of its differentials is that the ADA token is designed to ensure that its owners participate in the operation of the network. That is, whoever has the cryptocurrency has the right to vote in any proposed change of the software.

The token’s name, ADA, is a reference to mathematics Ada Lovelace, daughter of poet Lord Byron and recognized as the first computer programmer.

Where to buy the ADA token?

ADA can be purchased on major international exchanges, such as Binance, Coinbase, Houbi, Kucoin, and Kraken. In Brazil, to buy in Brazilian real, the options are Binance, NovaDax and BITTREX.

Who is the fonder of Cardano?

Cardano was founded by IOHK CEO, Charles Hoskinson, who was also one of the creators of ethereum. In addition to being a technology entrepreneur, Hoskinson is a mathematician.

In 2020, his technology company donated the value of US$ 500,000.00 of ADA to the University of Wyoming’s Development Lab and Research on Blockchain.

What are the prospects for Cardano?

The trend is upward. On March 16, US brokerage Coinbase began supporting the cryptocurrency on its Pro platform for traders, and following the announcement, the asset appreciated by 18%.

A day earlier, on March 15, the ADA was also added to the Bloomberg terminal, a platform used by professional traders, which facilitates the exposure of the cryptocurrency to new potential investors.

It is worth explaining that the Cardano project is undergoing a phased upgrade, which are named Byron, Shelley, Goguen, Basho and Voltaire. The Goguen phase, which will give users the opportunity to create and execute smart contracts on the network itself, is planned for the coming months.

Another good sign for investors is that Cardano has received a contribution from FD7 Ventures, which recently allocated $250 million to fund companies creating solutions in Cardano and Polkadot.

The technological innovations brought by Cardano

Among the cryptocurrencies in the market, the asset stands out for its constant search for decentralization. Thus, it prevents miners from forming groups in order to try to dominate or manipulate the market. For such purpose, it uses only the proof-of-stake protocol (PoS), in which miners do not compete for computational power. Instead, the machines that will be the validator nodes of the blocks are drawn by lot.

A cryptocurrency with a strong community of supporters

The Cardano Foundation’s ICO already showed how much support the proposal would receive. The offering raised US$ 62 million to start the development of the open source project. In addition, the project is among the most active on Github, showing the regard its proposal is receiving on the market.

The development seeks to involve researchers from universities in various countries around the world in the search for technological optimization solutions. Among the universities involved are Tokyo Tech, Oxford, Edinburgh University, and the University of Athens. In addition, there is also collaboration with companies such as Metaps Plus and Sirin Labs.

Why is Cardano a promising cryptocurrency?

The Cardano Foundation is getting ready for the financial market and for that reason is searching to comply with current regulations. In addition, the foundation has partnered with the Ethiopian Ministry of Science and has met with legislators in Taiwan. Thus, the cryptocurrency has the potential to dominate the crypto market in the coming years.