Cream Finance platform is hacked for the third time in 2021

While experiencing significant growth in the cryptoasset market, some Decentralized Finance (DeFi) projects have experienced vulnerabilities that have resulted in hacker attacks recently.

According to Investing, the Cream Finance token (CREAM) price plummeted in the market as the platform was hacked. In less than two hours, the cryptosset melted more than 32% and lost the support of US$ 100 through the CREM/USDT trading pair.

The hack that resulted in the loss of US$ 130 million in cryptoasset on the Cream Finance platform is known as “flash lending”, where a massive attack allows cryptoassets to be diverted while loan requests are generated.

After transferring the cryptoassets from Cream Finance, the hacker divided the value into several digital wallets, seeking to hide the trail of the billionaire theft. This is not the first time the Cream Finance protocol has suffered a hacker attack on the market.

In February 2021, Cream Finance was hacked for the first time. Using the same type of attack, criminals diverted US$37.5 million from the platform through loan applications.

The second attack against the platform happened as recently as August 2021, when nearly US$ 500 million was siphoned off from Cream Finance. In total, the hacker managed to steal 2,804 Ether (ETH) units from the platform, which are currently valued at US$ 12.5 million.

Of US$ 496 million stolen in cryptoassets during the second hacker attack, the criminals returned about 90 percent of the balance to Cream Finance. In addition to this protocol, other Decentralized Finance (DeFi) projects have experienced irreparable losses in 2021.

In August 2021, the Poly Network platform also suffered a hacker attack, losing an amount similar to the one stolen from Cream Finance. In the case of Poly Network, the criminal embezzled US$ 611 million in crypto assets. 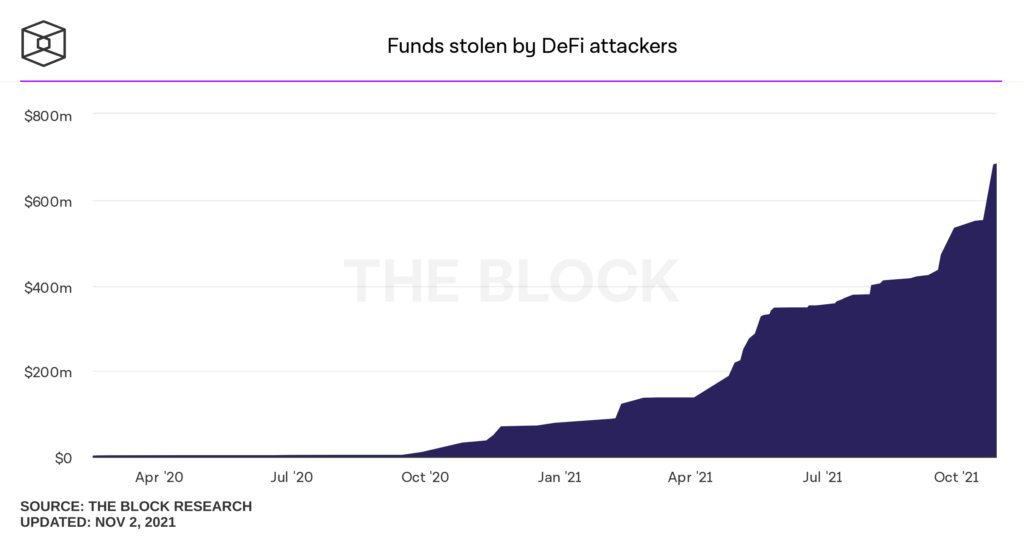 According to data from The Block Crypto, this is the total amount lost by DeFi projects by November 4, 2021. Considering the amount siphoned off recently, there has been a 1,900% growth in the volume of stolen crypto assets, jumping from US$ 34 million to over US$ 680 million in just one year.