Bitcoin and digital assets: the spaceship that always comes back to get new passengers

I used to talk to my friends in 2013 and get into heated debates about the future of bitcoin and what we now know as digital assets. The price of a bitcoin at the time? Close to $ 100 in June of that year. Contradictory arguments ranged from questions about the cryptocurrencies ballast, also lacking in government currencies such as the real or the dollar – even though the popular imagination had the opposite view – to legitimate concerns about the adoption and popularization of this new technology. It was the age of skepticism before the new, the unknown.

On the side of those who believed in bitcoin and the future of digital assets, there was a kind of ethos, a social identity formed around technology. Simply, the concept was conceived that a digital asset would be scarce and would have emission, transaction and security rules guaranteed by an immutable mathematical protocol. The fallibility of the human being was exchanged for trust in mathematics. Vires in numeris, a Latin phrase meaning “strength in numbers,” was seen in forums, debates and lectures at that time. Being part of this was like getting into a spaceship that would free you from Plato’s cave in economic terms. The price? For this group, there was no doubt: the spacecraft would go to the moon!

The end of the year 2013 was approaching and philosophical discussions intensified. Bitcoin advocates were grateful for the rapid rise in prices and the inevitable exposure of the subject in mainstream media. The price of the currency went from $ 250 in early November, rapidly shooting to more than $ 1,000 on the first day of December. Had the rocket reached the moon? Friends called me to ask, “Thiago, how do I get to those fractions of bitcoin you sent me to demonstrate the technology?” Some skeptics began to realize that the subject deserved special attention, but the prevailing opinion was that it was all a bubble, a collective hysteria similar to the tulip mania of centuries ago.

The most offered advice in December 2013 was: “If I were you, I would sell everything. Put the money in your pocket. Congratulations on believing. ” But as good crew members of the spacecraft, many held their positions in bitcoin hoping to reach the Moon. Ironically, however, we saw the price drop from $ 1,000 to $ 400 in March 2014, opening space for the most diverse interpretations. Subsequent years reinforced skeptics’ stances, with bitcoin squeezing price levels nearing $ 200 in 2015 and returning to slim $ 500 in 2016. For the non-crew, everything was crystal clear: “we warned.” On the other side, the supporters’ vision of technology preached patience; the spacecraft had only returned to fetch more passengers.

The year 2017 injected new confidence into the digital asset market. In February, we had the price returning to $ 1,000 in May, $ 2,000, August $ 4,000, and everyone was saying, “The moon is right there.” Market capitalization exceeded $ 100 billion in June 2017, and in November that year, the price of bitcoin exceeded $ 10,000. Ecstasy took over the market. The media covered the issue relentlessly, and the New York Stock Exchange already showed bitcoin quotes as well as several finance websites and currency conversion applications. Banks opened digital asset trading desks in Switzerland, Singapore, and Japan, and the digital asset market hit $ 700 billion in market capitalization, which is larger than the four largest Brazilian banks added in this area. The dream became a reality.

The turn of the year from 2017 to 2018 was a re-edition of the 2013 climb. Bitcoin peaked at the $ 20,000 frontier, and the market was flooded by new brokerages, new crypto coins projects, consultancies, and funds, consolidating a close approach of the formal financial market with the emerging digital asset industry. The ecosystem took advantage of the inflow of capital to become more robust, as well, since the subsequent move from March 2018 to the present was yet another test of resilience for the technology crew: in April, the price of bitcoin returned to the $ 7,000 and in December, $ 3,500.

Lessons can be taken as we look at the digital asset market journey. Like all asset classes, expansion and contraction cycles are present, but they appear to be much faster than in more traditional assets like gold or silver. In terms of asset classification, there are interesting parallels between bitcoin itself and countercyclical and inelastic offerings, such as gold and silver. To complement, the imminent approval of bitcoin-based ETFs can bring the same valuation seen in gold, according to the chart: 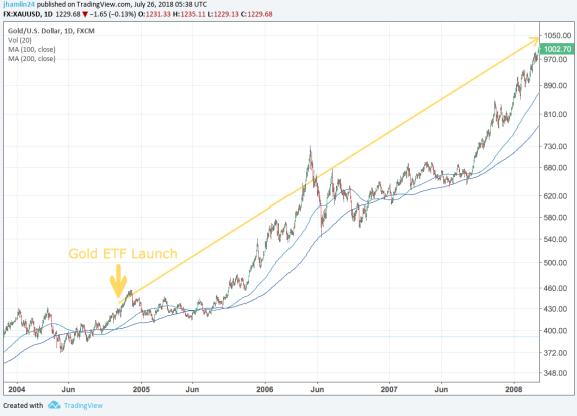 In summary, the digital asset market goes through a phase similar to the low 2014-15 period, but with much clearer upside potentials. In the 2013 boom, in the range of $ 100 to $ 1,000 in a few months, the feeling was uncertain about the future of this new asset class, with many suspicions of bubble or collective hysteria. Today, the degree of maturity of the industry has changed. Institutional players have already made inroads into the world of digital assets, the regulatory environment is more consolidated, and players who have survived the ups and downs are more robust than ever. With prices at the levels of August 2017, there are not many doubts: the spacecraft has returned to look for new passengers. Destiny? The moon.