In 2021, bitcoin has strengthened, reached an all-time high and the market comes close to surpassing the silver

Despite volatility, in 2021, bitcoin was considered one of the best investments; for Transfero, a bullish outlook remains

Bitcoin has become firmly established on the world market in 2021. After the historic fall in 2020 due to the pandemic, and its economic impacts, which affected all markets, the BTC resurged with strength, appreciating by about 138%, when reaching its all-time high on November 10 – the date it hit US$ 69,000.

It was a positive year for the crypto market as a whole, with its value surpassing the US$ 1.2 trillion mark. As a result, the sector reached eighth place in the global marketcap ranking, surpassing some companies like Tesla and Meta (Facebook), and coming close to surpassing a millennial asset like silver.

But despite the appreciation and consolidation in the market, the year was marked by large oscillations in the bitcoin price. In Transfero’s evaluation, “it was nothing unusual, as we are already used to in this crypto environment”. 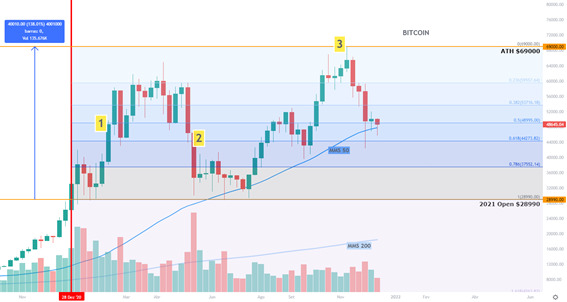 According to the chart analysis, the Transfero team highlights some relevant points:

Throughout February, the price of BTC was renewing its all-time high week after week. One of the pillars of this bullish movement was large institutional companies (e.g., MicroStrategy and Tesla), responsible for bringing billions of dollars into the crypto market.

In addition, another aspect driving this bullish move was public statements by Tesla CEO Elon Musk in favor of bitcoin and the crypto world. At the time, he stated that he planned to accept bitcoin payments in exchange for his products.

In addition, 6 million new users bought cryptocurrencies in the first two months of this year alone.

Trade bitcoin and other cryptoassets on Crypto Transfer with deposit and withdrawal in reais.

After the early-year surge that took the price above US$ 60,000 in April, a sharp correction came in May. Again, the start of the drop coincided with statements, this time negative, from Elon Musk, about the environmental impact bitcoin could bring.

But what really gave strength to the fall was the restrictions imposed by China, which banned financial institutions and payment provider companies from rendering services related to cryptocurrency transactions.

After going through the bearish period in May, bitcoin began to advance consistently throughout July and August. Market-friendly news, such as El Salvador becoming the first country to adopt BTC as legal tender, boosted its price.

However, before reaching ATH, bitcoin suffered some corrections. The first of these was the miners’ sell-off, which impacted the global crypto market when more than US$ 418 billion was liquidated. Later on, there was the crisis at China Evergrande Group, China’s leading real estate developer.

In October (“UPtober”) BTC rose strongly again due to the launch of the first bitcoin-related ETF in the United States, making way to reach its ATH of US$ 69,000 in mid-November.

However, after the euphoria of reaching the historic mark, the price of bitcoin fell for three consecutive weeks, something that had not happened since 2020 at the time of the pandemic. The reason for the new drop was precisely the uncertainty on the world market regarding the new Covid variant. Investors clung to the recent history, and there was a big rush for liquidity.

“But we can see from the chart that in the long run, the market outlook remains in an uptrend. On this weekly chart, prices are above the MMS 50, which is a good sign. Moreover, throughout the year, we had positive volume closes (more inflows than outflows) for 29 weeks, which means that almost 60% of the weeks in the year were positive”, Transfero’s experts said.

Moreover, they pointed out that historically, in Q1 (first quarter of the year), altcoins tend to stand out, which causes the market to appreciate as a whole, leading BTC to renew its all-time high next year.

Blockchains, games, and metaverse were highlights

Infrastructure-related currencies (blockchains) were on the rise in 2021. As transaction fees on the Ethereum network (ERC-20) increased, alternative blockchains began to gain prominence.

Such blockchains aim to be highly scalable and enable low-cost, secure, and decentralized transactions. In this context, some projects that gained a lot of traction in 2021 were: Solana (SOL); Avalanche (AVAX); Algorand (ALGO); and Polygon (MATIC). Thus, with the development of the ecosystems of these cryptos and the increase in the number of users, their tokens had a high valuation in the year.

On the other hand, in the play-to-earn model and virtual reality platforms that seek to create a metaverse, Blockchain games had great prominence in 2021. The possibility of collecting and trading NFTs or tokens during the experience has revolutionized the market, providing good rewards for users. Regarding “blockchain gaming” and metaverse, the standout projects were Axie Infinity (AXS); Star Atlas (ATLAS); The Sandbox (SAND); and Decentraland (MANA).