Ten platforms that were featured in 2021

The number of developers interested in a project may be indicative that it is becoming representative, points out a report by Electric Capital

The number of developers working in a crypto ecosystem can be seen as an important indicator of where value will be created and accumulated over the next ten years. The assessment comes from Avichal Garg, managing partner of the cryptocurrency-focused venture firm Electric Capital, who conducted a survey on which platforms attracted such professionals the most last year.

The study showed that many developers had invested their efforts in developing open-source Web3 projects, and more than 20% of them prefer the Ethereum network.

Other ecosystems have grown: Polkadot, Cosmos, Solana, BinanceSmartChain, NEAR, Avalanche, Tezos, Polygon, and Cardano, each of which has more than 250 monthly active developers. In addition, the report pointed out that the Polkadot, Solana, NEAR, BSC, Avalanche, and Terra networks are growing faster than Ethereum.

Check out the fastest growing networks

The survey compared data from December 2020 to December 2021 to calculate the growth of each of the platforms. The result can be seen in the chart below. 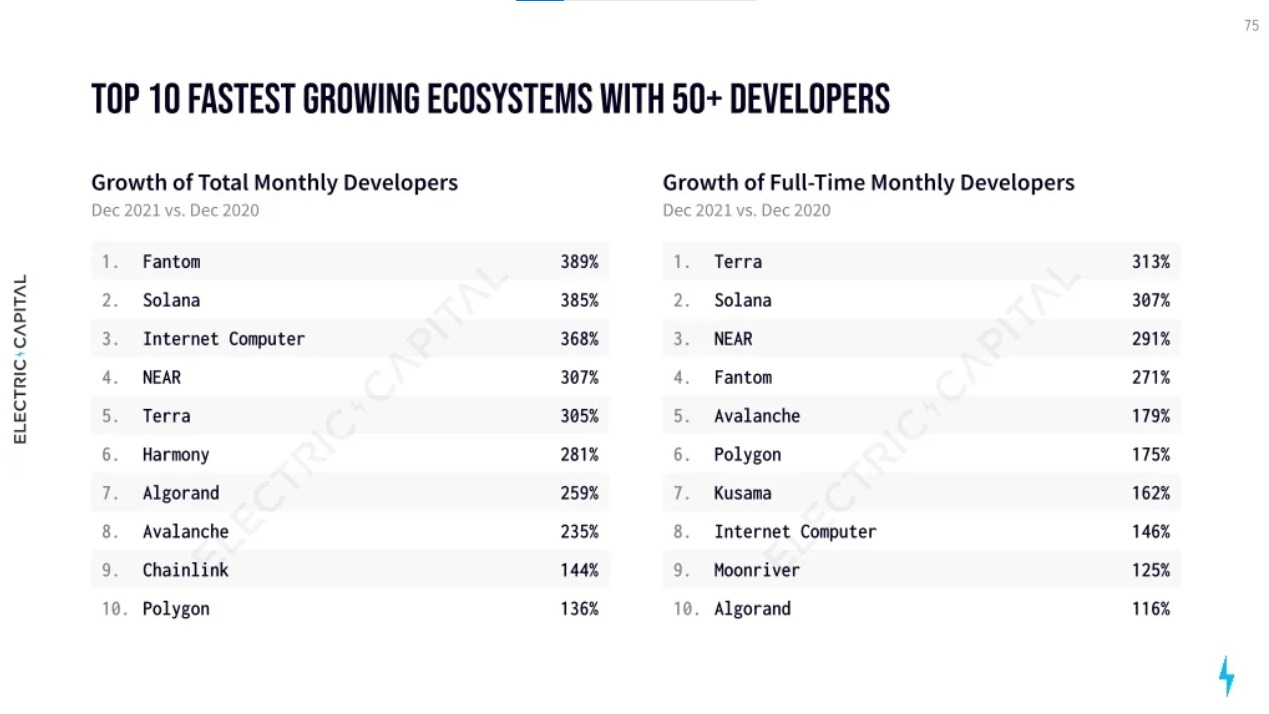 You can see that the fastest-growing platforms are all Ethereum competitors. This is because users are looking for more agile and lower-cost transactions.

In addition, more than 34 thousand new developers worked on an open-source Web3 project in 2021, which is the largest number of new developers in the sector in history.

Ethereum and bitcoin continue to grow, as do DeFi

Despite the boost to the other ecosystems, ethereum and bitcoin saw a 42% and 9% increase in developers in 2021, respectively. Ethereum has 30% of full-time developers joining the industry after 2017, with one in five new Web3 entrants working on its network. Bitcoin, meanwhile, had an average of more than 600 monthly active developers as of December 2021.

The survey showed that DeFi grew by 76%, in line with Web3’s overall growth. In addition, DeFi’s monthly full-time active contributors grew by 64%. About a thousand developers manage smart contracts with more than US$100 billion in assets.