What happens when we put together blockchain, participatory economy, and digital games? A business model that can transform an entire industry! Play-to-Earn (P2E) is a format that allows users to collect cryptocurrencies or NFTs while playing in a digital environment. Currently, the model is playing to win in the gaming industry.

In a recent interview with the Where it Happens podcast, Reddit co-founder Alexis Ohanian said that 90% of games would be P2E in the next five years. He explained: “In five years, the user will value time properly, and instead of being at the mercy of advertisements, or being forced to buy things that don’t make sense within the game, the user will be playing a chain game, which will be so much fun and bring so much value. So he will be the one who will reap the money.

This is because P2E manages to subvert a bit the logic that has governed the games segment until today: either the player pays to play (when buying games for consoles or PC, for example), or he pays to be better at the game (it is the case of freemium games or even console games). After all, in P2E, the user wins to stay in the game. Even with the growth of eSports, a market that is expected to exceed US$ 3 billion by 2025, the possibilities for “ordinary” and non-professional players to earn some money just by playing are almost none, giving even more relevance to P2E.

Play to Earn: How it works

P2E games aim to create a space for users to collect and cultivate cryptocurrencies that can then be traded on third-party marketplaces, and all of this using blockchain. Most games have chosen to use Non-Fungible Tokens (NFT) within the game universe. It is as if the coins Mario collects are, in fact, unique coins and could be sold. In P2E, the gamer is compensated for the time spent in the game and encouraged to continue exploring the environment.

Currently, games of this type have grown so much that they have almost created an industry for themselves: GameFi, a mixture of DeFi (decentralized finance) and the gaming world. Because it is decentralized, some P2E games allow a player to let others mine on their virtual land, as is the case with Alien Worlds. Another example is the game Axie Infinity (the most popular of the P2E model), which distributed two types of cryptoassets, AXS and Smooth Love Potion (SLP), as well as character NFTs and in-game digital territory.

Axie Infinity is a game based on Nintendo’s Pokemon. In other words, the player collects several “little monsters” (NFTs, therefore unique) and battles with others to increase their powers. The game uses the Ethereum blockchain and runs on its sidechain called the Ronin Network. As of January of this year, Ronin recorded 560% more transactions than Ethereum in November last year. Currently, Axie Infinity has 2.8 million daily users and has a marketplace of NFTs that has handled US$ 2.6 billion.

If, on the one hand, users are looking for more of these games, on the other hand, investors are watching, putting a few million dollars to stimulate the segment. Axie Infinity’s creator, Sky Mavis, was valued at US$ 3 billion in October 2021. Sandbox, meanwhile, managed to raise an investment of US$ 95 million in a round late last year. Joining the billion betting market in the P2E and metaverse gaming segment is Animoca Brands, a Sandbox partner and investor in Axie Infinity, which was valued at US$ 5 billion in January.

On the venture capital side, there is an appetite to put more dollars into companies in this segment, which have been placed under the “metaverse” umbrella. Last year FTX teamed up with Lightspeed and Solana Ventures to create a US$ 100 million fund focused solely on the gaming world, focusing on P2E games. In addition, Andreseen Horowitz, who has already invested in Axie Infinity and other “NFT games” companies, is planning to create a fund solely to invest in games, with an emphasis on P2E games.

Even crypto-focused investors aim at having a strategy solely dedicated to looking at P2E companies, such as Matt Zhang, formerly of Citigroup, who launched a US$ 1.5 billion fund in partnership with Hivermind Capital Partners. 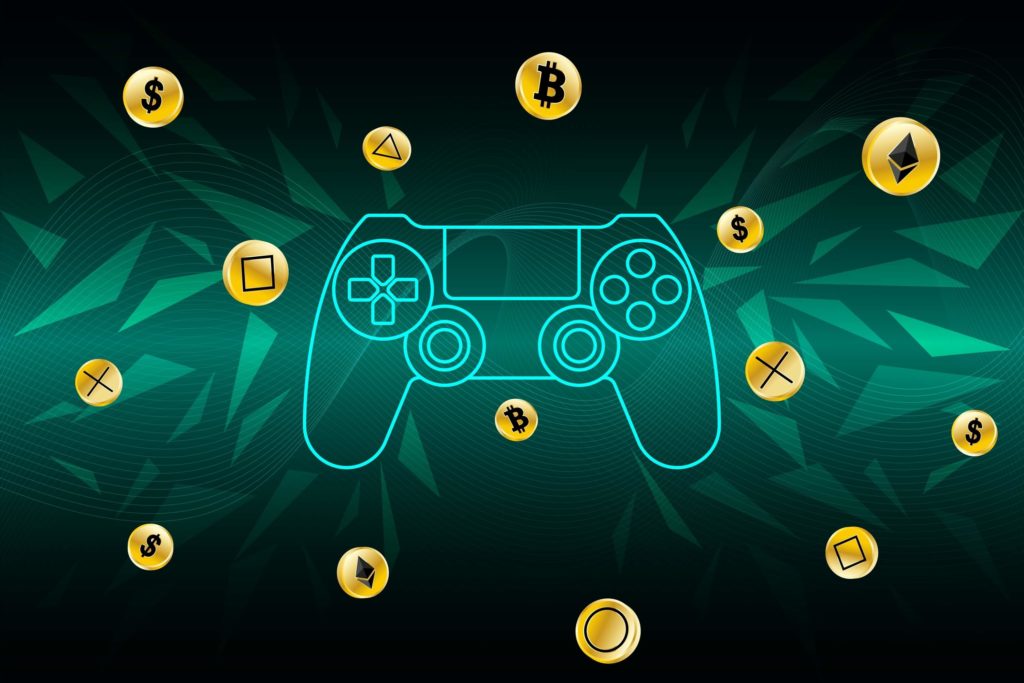 In real life, P2E helps public adoption of cryptoassets. According to Axie Infinity co-founder Aleksander Larsen, half of the game’s players had never used cryptocurrencies before getting in touch  with the game. “We see ourselves as educators”, Larsen said in an interview with Decrypt. Considering its cryptocurrencies and NFTs, Axie has a market capitalization of US$ 7.31 billion; Sandbox, on the other hand, has a total of US$ 635 million in value in its cryptoassets.

Some gaming-related cryptocurrencies, such as Decentraland’s MANA and Sandbox’s SAND, have risen recently, even as bitcoin has fallen. Not to mention the appreciation of tokens like Axie Infinity’s AXS, which started 2021 worth US$ 0.54 and ended the year worth US$ 150.

There are also cryptocurrencies that work in various games, as is the case with Enjing Coin. It works in multiple games and must be plugged into a smart contract. The coin started 2021, worth US$ 0.13 and reached US$ 4 in the middle of last year. It is worth mentioning here that of all cryptoassets, game currencies are the riskiest, as they depend on the game’s popularity to remain high.

In any case, the ability of games to create cryptocurrency exchanges or even assets that can be traded on a marketplace is the highlight of the GameFi movement. At least for now, as there is already a new wave within this market, the IGOs, or Initial Game Offering. It means that gamers can not only earn from the game via P2E but also invest in new games that are being developed via cryptoassets. With Initial Game Offerings, gamers can help create new games and still receive in return NFTs or cryptocurrencies from these upcoming games.

If last year, sales of NFTs totaled US$ 25 billion worldwide, much is due to P2E games. According to figures from the Blockchain Game Alliance, gaming NFTs accounted for 22% of the total NFT market in the third quarter of last year alone. Thus, putting into perspective other assets: the Axie Infinity marketplace is the second-largest NFT marketplace on the web, second only to Open Sea. It currently has almost 2 million users who own NFTs.

The visual nature of games makes NFTs make even more sense in storytelling: the user can own a unique part of the game. This also goes along with another “hot” buzzword in the market: the metaverse. To be able to keep users in the space – and still “getting” cryptoassets while playing – P2E games have been enriching the visual experience, getting closer and closer to what is meant by the metaverse: a shared virtual world where people interact, earn money, and exchange goods only in the digital. An example of this visual sharpening of games is Star Atlas, which, in addition to being on the Solana blockchain, uses Unreal Engine 5, responsible for the graphics of famous games like eFootball 2022 and Fortnite, to create an immersive, digital experience.

“We want to build an economy in which entrepreneurs, industries and individuals have the resources to generate value within this universe. This can be anything from building digital art galleries on in-game properties, like museums, or even stores, in which you can display and trade your collection of NFTs with other players”, explained the project’s CEO, Michael Wagner, in an interview with EXAME magazine. According to Wagner, the idea is that Star Atlas will host real band concerts, social or corporate events, among other activities that can be “digitalized” into the metaverse.

Another example of a game turning into a metaverse is Alien World. It is a P2E game that projects to recreate the earth in its digital space (as well as to create other “habitable” planets). Or the case of Sandbox and Decentraland, which are becoming known for being the digital land buying and selling settings. These are two game players with P2E strategies. The business model and the way of charging and payments should be closely observed by companies that want to enter the metaverse.