Bitcoin’s hashrate is already higher than before China’s ban

China’s bitcoin mining ban has already had its effects paid off, with an impressive hashrate recovery over the past seven months. According to CNBC, bitcoin mining has increased substantially, in line with the cryptoasset’s appreciation.

With full recovery, bitcoin’s mining power has increased 113% in the past half-year. Furthermore, data from Blockchain.com shows that bitcoin’s hashrate recovered between May and December 2021. 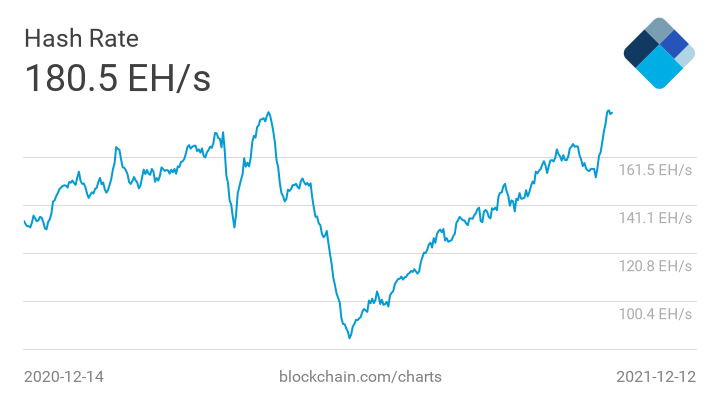 In May 2021, China issued a statement restricting cryptoasset mining activity, forcing the immigration of mining farms to other countries.

Until then, China concentrated between 65% to 75% of all bitcoin mining globally and was considered a leader in the industry. But with the nationwide ban on the activity, bitcoin’s hashrate has been affected.

As recently as May, the bitcoin hashrate dropped dramatically in the market, losing more than 50% of its data processing due to the ban in China.

However, the cryptoasset mining activity showed a surprising recovery. According to an interview with CNBC by bitcoin mining engineer Brandon Arvanaghi, bitcoin weathered a major attack from China, and emerged “stronger than ever”.

“The bitcoin network withstood an attack by a major superpower and emerged stronger than ever six months later”.

While China bans bitcoin activity, countries like the United States and Canada have attracted large mining farms. Currently, the U.S. is the largest bitcoin mining hub in the world.