In record week, bitcoin is the spotlight

On October 20, bitcoin’s price reached its all-time high, surpassing US$ 67,000. Transfero's technical analysis indicates that there may be a rapid escalation

After bitcoin renewed its all-time high, reaching a price of US$ 67,016.50, the currency is “in never-before-explored land”, according to the analyst team at Transfero. The experts point out that there may be a rapid rise to US$ 87,100, which would be the first target, according to the Fibonacci projection. 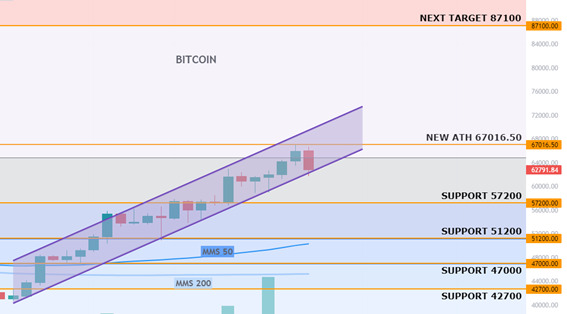 Through the chart above, it is possible to see the formation of a Bullish Channel, which is a continuation pattern that extends sloping – in this case, upward. “But it is good to keep an eye out for possible corrections. Prices are advancing within the Channel, and a break of the Trend Line (Bottom Line) could indicate a correction, leading the price to seek the US$ 57,200 support, which would be a good entry point”, analysts say. In addition, the sentiment analysis of the digital asset market points to a high level of greed (84 points).

Another highlight this week was the global crypto marketcap, which also reached a new record high, hitting US$ 2.73 trillion.

In Transfero’s view, the expectation is that this rise can reach new heights when altcoins start to gain strength from BTC’s bullish movement. However, they are still out of focus for now, since the momentum is entirely bitcoin’s, which is corroborated by its increased market dominance in recent days.

Aurory, Solana’s new play-to-earn game, is featured in the week

Aurory is a new play-to-earn game project on Solana’s blockchain that promises an intuitive and responsive platform to engage newcomers to the crypto universe. Inspired by highly successful games like League of Legends and Pokémon, Aurory seeks to create a revolutionary RPG (Role Playing Game) through NFTs and user reward mechanisms.

The IDO (Initial Dex Offering) of the coin (AURY) began on October 21 and will end on October 23. It is worth noting that FTX has announced that it intends to list the token soon. Alameda Research, Solana, and Serum are investors in the project.