Switzerland: learn more about the birthplace of “Crypto Valley”

The Swiss city of Zug is considered friendly for those who invest in the crypto asset market; with favorable legislation and taxes, the area is known as Crypto Valley

The name, “Crypto Valley”, is a reference to the so-called “Silicon Valley” in the United States, which is home to technology companies. In the case of Switzerland, the setting is focused on cryptoassets. Due to favorable regulations and taxation, several crypto companies have chosen to move to the Zug region.

It is home to the headquarters of the Ethereum Foundation, the Libra Association, Transfero Swiss, and several other blockchain companies. By the end of 2020, the top 50 companies based in Crypto Valley were worth US$ 37.5 billion. There are already almost one thousand organizations, employing at least five thousand people.

The great stimulus is that the cryptocurrency incomes in the region are treated as tax-free capital gains. Even mining is considered a self-employed job.

However, professional cryptocurrency trading is subject to corporate taxes; for example, those who receive cryptocurrencies as salary need to declare them in their income tax.

Do you want to get a close look on Crypto Valley in Switzerland?

If you are considering getting to know a culture that is totally different from Brazil and, as a bonus, participating in a society in which finances are decentralized, it is worth planning a trip to Switzerland.

Brazilians do not need a visa, as long as their stay does not exceed 90 days. The country, despite not being part of the European Union, is part of the Schengen area, which requires visitors to carry an insurance minimum coverage of 30 thousand Euros for accidents, illness and repatriation.

In addition, to enter the country, you must have a valid passport for at least six months (from the date of entry) and return ticket. Those who wish to stay longer should check the procedures for residence permit, which may have limited period and be restricted to the applicant’s professional occupation.

Thus, to stay more than 90 days in the country, it is necessary to have a guaranteed job or work permit, and for such it is necessary to practice a profession of economic interest  for the country and have qualification and / or specialization. The employer must ensure that he has not found any Swiss or European Union citizens for the position.

For study purposes, it is possible to apply for a student visa, provided that you enroll in a recognized educational institution in Switzerland and the course lasts for more than 90 days.

Technology and tradition: the contrasts of Zug

The city of Zug is actually not on the Swiss tourist route. Close to Zurich, it has a business center with offices of multinationals from many countries. For this reason, many foreigners live and move around there. Thus, the most widely spoken language is English.

But beyond the multinationals and the business center, Zug is famous for cherry production, a centuries-old local tradition. At harvest time, many growers sell the fruit from street stalls. 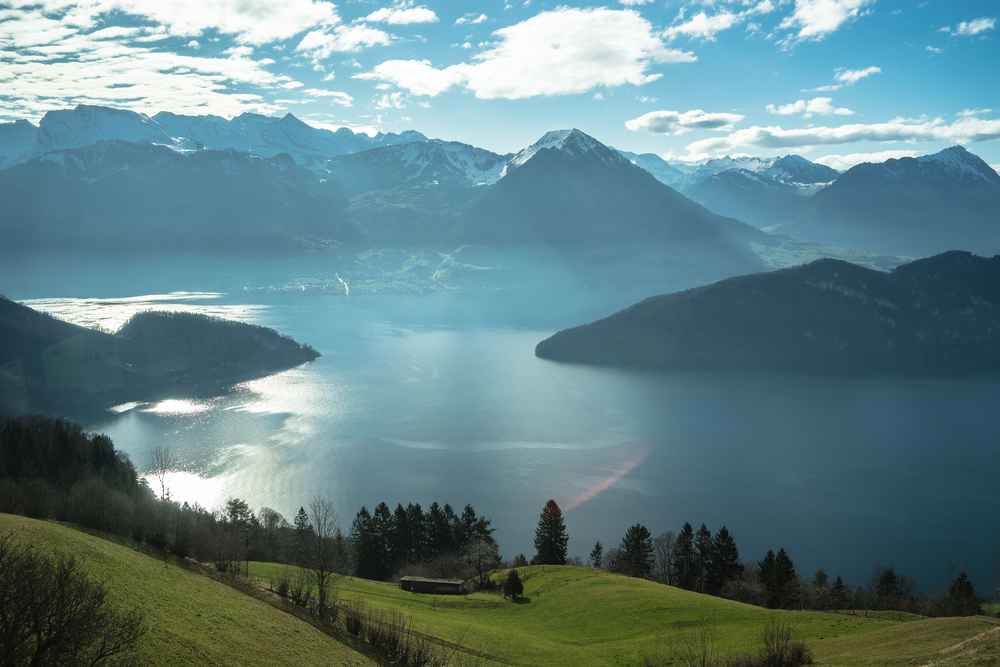 Lake Zug, overlooking the snow-capped Berne Alps, is also one of the city’s most famous landmarks. On its shores there are many restaurants and cafes from which to enjoy the view. The old historic center has medieval buildings, tiled streets, fountains, towers, and even a castle (Burg Museum).

Besides this region, Switzerland has much to offer visitors. As it is a small country, many distances can be covered by train. Indeed, it is worth purchasing the Swiss Travel Pass, which is accepted on train, bus, and boat tickets.

Switzerland is famous for its beautiful landscapes, snowy alps, chocolates, cheeses, and even the Swiss army knife. The country is divided into 26 states, called “cantons”, which have autonomy, with their own rules and laws. In addition, it has four official languages: French, German, Italian and Romansh (a language spoken by only 1% of the population).

As the distances are very short among the venues, besides touring the castles, lakes and natural landscapes, be sure to visit some famous spots, such as the Charles Chaplin Museum, built in the house in which he lived in Vevey. In addition, spot the statue of Fred Mercury in Montreux, place where he built a recording studio and where, to this day, fans from all over the world leave flowers.

The official currency of the country is the Swiss franc, but in large cities the euro is also generally well accepted. However, when paying in euros, you can receive your change in francs. The value of both is a little different, but in the exchange rate in real, the euro is worth more.