While bitcoin suffers from short-term fixes, altcoins stand out

Bitcoin has returned to the US$ 57.2k support mark; however, prices remain above the last 50-week average, which indicates an uptrend in the medium term

As Transfero warned in last week’s analysis, investors should watch for a possible breakout of the Bullish Line (LTA). “After the break of this line, the downward movement gained strength, quickly breaking through the highlighted support of US$ 63.3 thousand and returning to the current main support, of US$ 57.2 thousand”, explained the analysts team.

As can be seen in the chart above, this is the second time that the US$ 57.2 thousand support has been touched, which shows buying strength at this price.

“Reinforcing this drop, we can see in the image below that the Fear & Greed index has registered a strong reduction, moving from last week’s 77-point mark to 54 points”, pointed out the Transfero team.

According to analysts, another critical aspect, in addition to the support of US$ 57,200, is that daily price closures remain above the 50-week Simple Moving Average. Thus, according to experts, the trend would continue to rise in the medium term. However, a possible disruption of US$ 57,200, and as a result, with prices closing below MMS 50, could signal a slight reversal in the medium term.

It is worth noting that, despite this fall, the global market cap is still above US$ 2.50 trillion, and there is the expectation that by the end of the year, the altcoins will appreciate strongly.

Algorand, the blockchain of the future

According to Transfero, the week’s highlight was Algorand, an open-source, permissionless blockchain that solved the trilemma of security, scalability, and decentralization.

Its validation system is a “pure proof-of-stake” protocol, implemented in such a way that the probability of a fork is practically zero;

The blockchain is committed to sustainability, being a carbon-zero network, and admits on-chain governance by design. This week it reached its All-Time High at US$ 2.99 and was the fastest rising coin in the top50 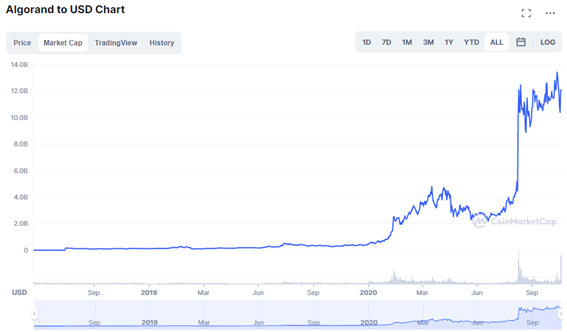